Here are some examples of archetype 6 Exile or Capricornus, often expressing Pan, Kokpelli, Janus, a double-header, scapegoat, or sacrifice. It is one of the sixteen character types that all artists and societies express in their works and building sites, in all eras (see Mindprint by Edmond Furter, 2014, Lulu.com, or www.edmondfurter.wordpress.com).

Type 8 Healer or Scorpius (decan Ophiuchus, or Galactic rift), is expressed here as a bauble head on a rope walker’s staff (artwork after Egyptian Hunters palette, Hierakonpolis, Naqada3 culture. Perdyn. Smith 1949. British Museum). Its adjacent type 9 Healer or Scorpius is bent in trance ritual as usual, holding a rope to an extra type 6 Exile or Capricornus, and a rear leg of type 5b Priest or Aquarius as a lion (felid, more often the guise of its opposite at 13). The other end of the rope passes under type 10 Teacher or Libra (see the South African Linton panel, in Mindprint, and in another post).

Bushmen say they “climb” out of trance by “the rope of the sky” (Biesele, cited in Lewis-Williams). Type 8 Healer or Scorpius, decan Ophiuchus and Hercules, are Samson types; roping torches to fox tails, adjusting polar pillars and cultural frameworks (see fox tails in a Chinese tile at theme 11, in Mindprint). To view Samson as arising from a constellation, as De Santillana and many other writers do, is to disown his archetypal pedigree, and to reduce culture to fragments of incidental and incremental hearsay. Type 7 Child or Sagittarius is often a youth, here a lion cub.

Type 6 Exile or Capricornus is sometimes a ‘double bull’ with two heads, here a gnu (see a Utah image at theme 5, in Mindprint). However average frequencies of the optional visual attributes of 6 are low. The type is more often recognised by being ingressed towards, or away from the axial centre (48% on average in artworks worldwide). Here it is on one of the longest axes, but nor furthest from the pole, as it more often is.

Type 5 Priest or Aquarius’s body overlaps type 6, as it does among constellations, one of the holographic coincidences that mislead many researchers into assuming that myths and icons derive from astrology, while the reverse applies.

Between types 5 and 6 a serekh (door facade, the early form of a cartouche), perhaps a midwinter marker in Age Aries. Celestial polar markers on a hoof and a canine jaw, on the axis of the rope end, tag the inspiration to Age Aries.

Type 5b Priest or Aquarius here is multi-armed, typical of figures flanking the galactic corners. He is large, active and body-painted as usual, with some attributes of his opposite 13 Heart or Leo in a large chest and an extra axis to his heart (usually 13 is the only character ‘seeing’ by his heart instead of his eye). Here 13 Heart or Leo, and 11 Womb or Virgo, share an axis. Due to damage, noted as prior ‘attempted removal’ in the museum, this work has only two demonstrated axes. A celestial polar marker on a hoof, and the vertical plane of the polar figure and some other figures, tag the inspiration to Age Pisces-Aquarius. 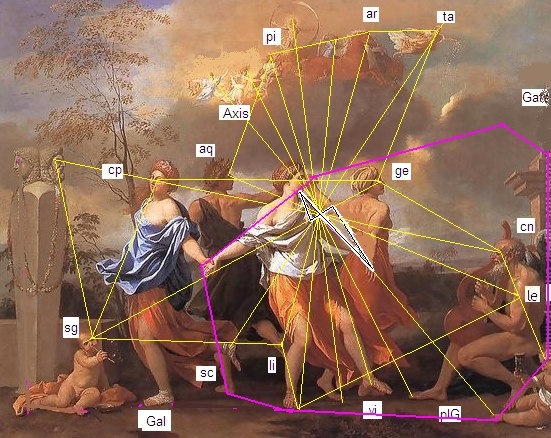 Type 6 Exile or Capricornus as a double-headed Janus, Pan or Hermes pillar (Poussin; Dance to the music of time, 1638. Type labels and axial grid identified by Edmond Furter).

Time belongs to its opposite, type 14 Mixer or Cancer, here strumming a tune as a ‘bookend’ opposite to the herm. Type 6 Exile or Capricornus expresses choice (as in the Paris’s Choice legend), and the present, which is difficult to obtain in a consciousness preoccupied with past and future, requiring meditation. The character is notably far from the pole (egress). A rational parallel to the spatial attribute, is that Capricornus was, and remains the archetypal position of winter (as Aries remains the archetypal position of spring), even before and after Age Aries.

Type 2 Builder or Taurus is a rain goddess (rain) or priestess (rainmaker), as she often is in rock art.

Type 10 Teacher or Libra expresses the carousel of life (wheel, balance), here figured only by a foot, as some of Poussin’s figures habitually do (Poussin and Blake are notable for often expressing fewer than the minimal 11 characters, and cor compromising the subconscious structure of their paintings by minimalism. See a study of miniatures and minimalist structural analysis in Stoneprint Journal 5; Culture code in seals and ring stamps).

A celestial polar marker on an elbow tags the inspiration to Age Pisces or Age Pisces late, incidental with the Renaissance. Polar markers are among the best examples of synchronicity, the apparently meaningful co-incidence of events or attributes, not traceable by physical causation or conscious logic.

Type 6 Exile or Capricornus as a goat and a human, between a double-headed character and a flute player, both features of type 6 (see Kokopelli in Canada below). The double-header, perhaps head-butters or wrestlers, or a figure with six legs, is at type 8 Healer or Scorpius, or type 7g Galactic Centre; and the flautist is at type 5b Priest or Aquarius, a type prone to sharing and swopping features (see theme 5 in Mindprint). Krishna, Pan, Kokopelli and other flute players as forest lords appear in rock art in the Americas, Africa (including Zimbabwe) and India. Ian Anderson, composer and flautist of jazz rock band Jethro Tull, is possibly an incarnation of Krishna, or at least subconsciously started expressing the repertoire; chromatic music of close-fitting notes, arpeggio slides, meditative riffs, standing on one leg, hairy, popular with goat herdesses, and campaigning for forest preservation.

Anderson discovered on a concert tour of India that “They thought I was making fun of Krishna and I had to explain that I had no idea that Krishna did this… I discovered that I was not the only one-legged flute player on earth.” (Ian Anderson; Jethro Tull, Living with the past, DVD EREDV266, Eagle Vision). A bagpipe with lilting tunes over a set of drones is also a kind of Pan music.

Type 5b Priest or Aquarius is dominant here, with a type 6 Exile or Capricornus trunk (proboscis. See a similar figure with large genitals instead, in the USA California Piedra Pintada copy at theme 5 in Mindprint). Some 6 types have Pinocchio noses doubling as flutes.

Celestial polar markers on Pan’s genitals and hip damaged by flaking) tag the inspiration in this rock art work, to Age Pisces-Aquarius. The horizontal plane tags for Age Aquarius. This poor copy of a damaged image demonstrates the order and focus that mindprint brings to apparent doodling chaos, and the window it opens on the human subconscious.

Edmond Furter wrote the book Mindprint, the subconscious art code (2014, Lulu.com), to demonstrate five layers of recurrent features in 200 artworks of all cultures and Ages, revealing the archetypal core content of culture. His second book, Stoneprint, the human code in art, buildings and cities (2016, Four Equators Media), expands demonstrations of the subconscious expression of archetypal structure to houses, temples, monuments, pyramid fields, geoglyphs, villages, cities and regions. The same structure also appears in mythology, such as Babylonian building rituals; and in reflexology points in our hands and irises, thus in nature. Stoneprint also demonstrates that the periodic table is a kind of natural 'culture', and that culture is a natural 'species' of behaviour. The structure in our works is as rigorous as grammar or DNA. The books Mindprint, and Stoneprint, and editions of the structuralist anthropology periodical, Stoneprint Journal (some of which are available on Lulu.com), draw on extensive research in iconography, archaeology, history, esoterica, astronomy, art history and structuralist anthropology, spanning 26 years. The core content of culture includes about 100 recurrent features of the sixteen main types, their sequence, five polar markers, and a time-frame orientation, that nature, individuals and societies subconsciously and compulsively express in all media. The mindprint or stoneprint model of structuralist anthropology has several major implications for all the human sciences, and offers a theoretical bases for a holistic approach to the study of the cultural record. Edmond Furter works as a freelance researcher and editor in Johannesburg. Order the book Mindprint at $30, or the book Stoneprint at $30, or editions of Stoneprint Journal at $5, plus postage, on edmondfurter at gmail dot com; or Mindprint, or Stoneprint Journal editions on Lulu.com View more posts